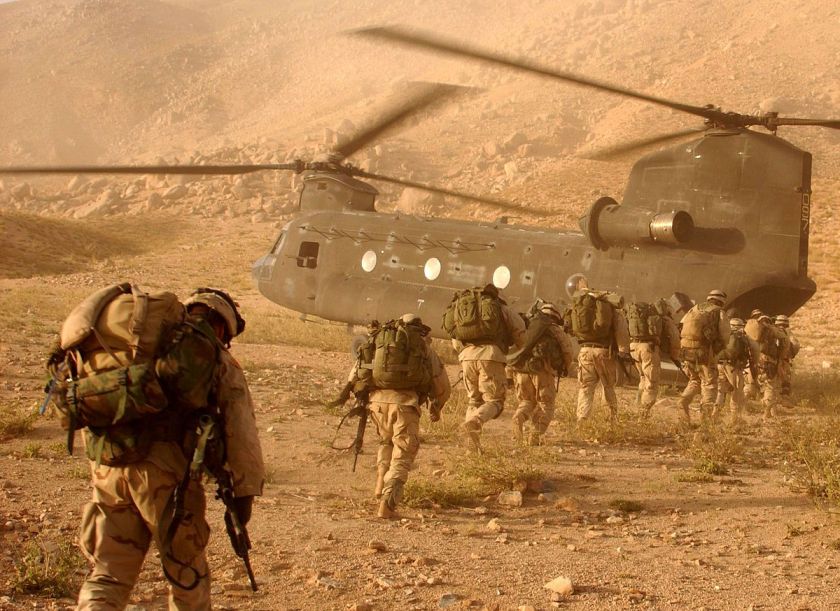 US soldiers march toward a CH-47 Chinook helicopter on on Sept. 4, 2003. Photo credit: Photo Courtesy of Staff Sgt. Kyle Davis

As U.S.-funded military operations in the Middle East escalate to unprecedented levels and the military-industrial complex continues to thrive, seemingly no one notices as the perpetual occupation recedes into the background of the new norm.

Fifty-eight years ago, on Jan 17, 1961, President Dwight Eisenhower first warned the nation about what he described as a threat to the democratic government, the military-industrial complex, and it seems almost no warning has rung truer since.

In discussing American military activity, it is important to note that according to the White House’s latest war report, the U.S. is currently militarily involved, or has unclassified operations, in the seven countries of Afghanistan, Iraq, Syria, Yemen, Somalia, Libya and Niger.

The U.S.’s military involvement with Afghanistan recently entered its 18th year, the longest war in U.S. history, with U.S. commanders saying there’s no end date in sight. To put this into perspective, those born after the war began can now enlist in it.

Despite some wanting to minimize current U.S. military involvement, U.S.-funded military activity in the seven countries listed is actually increasing rather than decreasing.

According to Business Insider, the U.S. is on pace to bomb Afghanistan more than ever this year. “The total weapons deployed by manned and remotely piloted aircraft through May this year is 2,339, more than were dropped in both 2016 and 2015,” the article said.

Last year President Donald Trump said that the U.S. would increase its troop presence in Afghanistan to combat the resurgent Taliban, and according to the BBC, “the Taliban control more territory than at any point since the removal of their regime 17 years ago.” This recent report by the BBC also showed that civilian casualties are at an unprecedented level, with more than 10,000 civilians killed or injured in 2017.

While the New York Times recently stated that due to this high death toll, the Afghan and American governments decided to keep battlefield death tolls for Afghan security forces secret. This secrecy of activity has extended to strikes in Yemen as well, according to the Bureau of Investigative Journalism.

Despite all of this, at a time when the U.S. is more militarily involved in the Middle East than ever before, it seems as though almost no one is talking about it, or as if most people have simply forgotten that we are even at war.

The most chilling example of this is a tweet by a Reuters foreign policy correspondent showing exactly four journalists in a sea of empty chairs at a recent Pentagon briefing on Afghanistan.

Perhaps it is time that we reconsider the direction, and general philosophy of war, in which we have trudged down for the last two decades. Perhaps the current strategy of escalation and the justification for perpetual occupation in the name of an un-winnable “war on terror” is not the right one. Perhaps it is time we end the military-industrial complex that has ravaged the Middle East.

Article originally published by The Sentinel

After the shooting at the Capital Gazette, many are questioning the future of journalism. Photo credit: Kevin Barrett

After receiving the jolting news of the Capital Gazette shooting that left five journalists dead last week, many have questioned what this event means for freedom of the press in the U.S.

According to The Hill, the gunman had a poor relationship with the paper and attempted to sue the paper for defamation.

In recent years the lifeblood of any democracy, the fourth estate — the free press —has increasingly come under attack. Many journalists, including the Sentinel staff, have come to fear the unwarranted risks of the profession, even in their own town.

According to the Washington Post, 2017 was the most dangerous year ever for journalists, and data published by press freedom organizations indicate that the threats faced by journalists worldwide are only increasing.

There has been increasing political pressure on journalists in the U.S. with President Donald Trump often referring to the press as “the enemy of the people.”

Unfortunately, this phrase has a very long and horrific pedigree that can be found in both the French Terror and Soviet Terror. Thousands of people have been executed as “enemies of the people.” Margaret Sullivan of the Washington Post questioned what role this type of political atmosphere may have played in the actions of the Capital Gazette shooter.

Julia McIntosh, a journalism major at KSU, says that while the attack has made her more fearful of the dangers to journalists, she is not deterred.

“It’s made me more scared to be a journalist,” McIntosh said. “I’m never going to be scared to tell stories for those in need.”

In the age of growing political polarization and nationwide accusations of media, we must not forget the importance and sacrifice of journalists. Although “facts” and well-vetted sources are the cornerstone of quality journalism, and it is the duty of the people to call out errors or mistakes that are made, we have grown to be a completely intolerant people. People sit comfortably behind a computer and hurl insults or belittle the sacrifice of journalists who work long hours for very little pay, and who sometimes pay a price too high for it.

Journalism is constantly changing, and we as journalists must always adapt. We must never forget the sacrifice and bravery of the journalists who fight to bring truth to light.

The Sentinel staff would like to honor those killed in the attack: Gerald Fischman, Rob Hiaasen, John McNamara, Rebecca Smith, Wendi Winters.

Article originally published by The Sentinel